8 new buildings, 2.1 million square feet: Fenway’s parking lots are about to get a major makeover 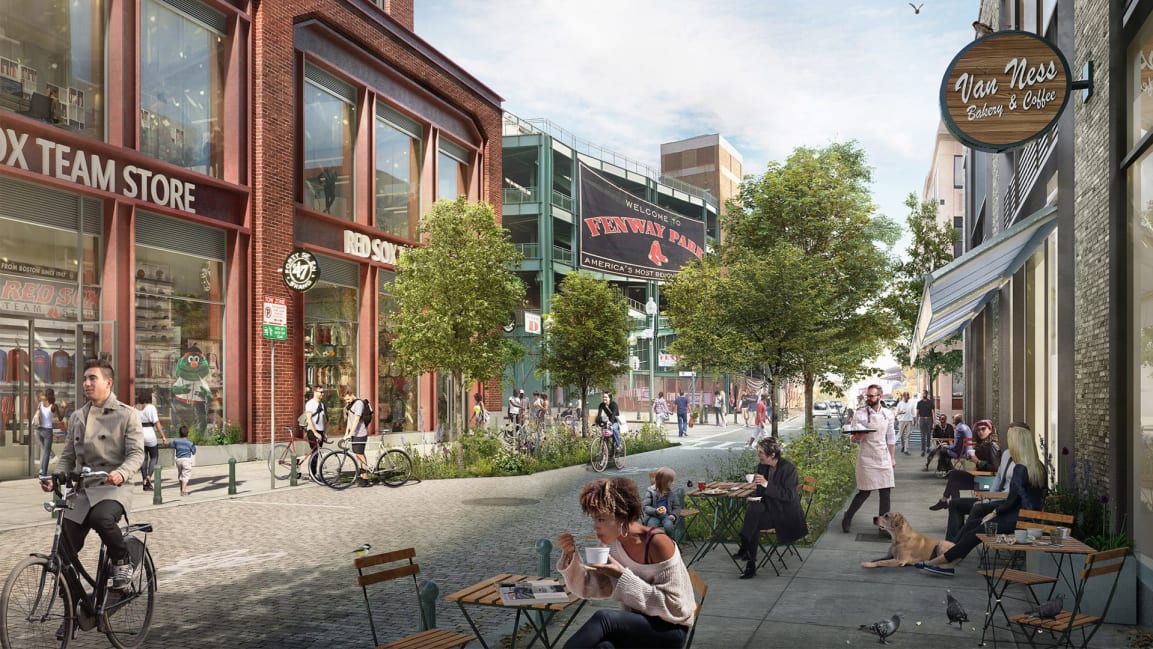 Like a lot of sports stadiums in the United States, Boston’s Fenway Park sits in an area dominated by parking. There are surface lots, parking garages, and plenty of streets designed specifically to get people in and out on game days.

A new development plan aims to convert those parking lots into a neighborhood that feels more like a part of the city. With offices, more than 200 homes and 40 retail sites, and a new pedestrian-oriented street leading up to the ballpark, the project will bring 2.1 million square feet of new development including eight new buildings to what are now mostly places for parking.

The project is a joint partnership between Fenway Sports Group, owner of the Boston Red Sox; the D’Angelo family, which owns sports apparel company ’47 Brand; and Boston-based real estate developer WS Development. They’ve pulled in some of the biggest names in urban design to turn the vision into reality. Boston-based Sasaki is leading the urban planning, with architecture by Morris Adjmi Architects and Allied Works, and landscape architecture from James Corner Field Operations, designer of the acclaimed High Line elevated park in Manhattan.

The plan for the area includes 11 parcels immediately adjacent to the stadium, along with the proposed pedestrianization of Jersey Street, which borders the ballpark and would add an acre of public space to the neighborhood. Overall the plan prioritizes pedestrian and cyclist activity and transit access in an area that was previously associated primarily with parking and street traffic. Though the area around Fenway Park does have some development dating back to the late 19th century, the project’s developers saw an opportunity to better weave the stadium into the existing neighborhood by dialing back the emphasis on cars, though not completely eliminating parking.

“The opportunity now is to transform that area right around the ballpark into a 24/7 piece of the city that offers the best of the new but that also feels like a part of the surrounding neighborhood,” says Yanni Tsipis, senior vice president at WS Development. He says the goal is to insert development in the neighborhood in a way that “feels as if that part of the city grew on a timescale that’s more akin to a great European city than a modern American one.”

The project won’t be happening in isolation, as the neighborhood has been in transition for the past decade or so, according to Tsipis. Compared to 20 or 30 years ago, when few people wanted to live in the area, it has grown into a place with more neighborhood-focused retail activity, including cafés, bars, and shops.

The urban design and architecture are trying to accelerate this evolution. Tsipis says WS Development hired Morris Adjmi Architects specifically for its experience working in historically significant districts and buildings, such as the redevelopment of the Atlantic Plumbing Supply Co. campus into apartments in Washington, D.C. Some of the work around Fenway Park will focus on restoring the historic facades of existing buildings to celebrate the neighborhood’s deep connection to the history of the city.

But the project won’t be just a historical re-creation, which has been a common trope in the recent redevelopment of baseball stadiums. When it was redesigned in the early 1990s, Baltimore’s Camden Yards kicked off a trend of baseball stadiums embracing nostalgic retro designs that hearken back to the early days of the sport. Tsipis says the design team for the Fenway Park project has been very cautious about avoiding design elements that could make the area feel more like a theme park than a neighborhood. Part of that effort involves not just historic facades and building types, but modern architecture, including mass timber projects and green space that’s accessible both publicly on the street level and privately on building terraces and roofs. Diversifying the building types and materials, Tsipis says, is part of ensuring the area is accessible to a diversity of people, from office workers to residents to rowdy baseball fans.

“It’s a significant responsibility to develop an area around a destination with so much beloved history and heritage and identity,” Tsipis says. “We want to create an urban context for the ballpark and for the Fenway neighborhood as a whole that feels really good and welcoming to lots of different people for lots of different reasons.”

The project is currently in its planning and design phase, and is now getting permits from the city. The first building is likely to begin construction sometime in mid-2022, and Tsipis expects the entire plan to be built out over the next six to eight years. Though the project will primarily involve removing parking lots and garages, it does stand to bring significant change to the character of the neighborhood, likely in the form of increased rents. The developers hope to lure local businesses to the planned retail spaces. Other baseball stadium area redevelopments like St. Louis’s Ballpark Village have struggled to pull this off. Bringing businesses beyond just those serving baseball fans may be a challenge.

The project had been in the works before the COVID-19 pandemic, and hews closely to what was originally planned, according to Tsipis. He argues that the pandemic has only bolstered the case for the project’s focus on creating more pedestrian activity and reducing the dominance of cars and parking there. “If anything, it’s reinforced our belief that we’re not just designing great buildings,” he says, “but we have to focus equally on the importance of the public realm between the buildings as this is very much part of the day-to-day rhythm of the project.”