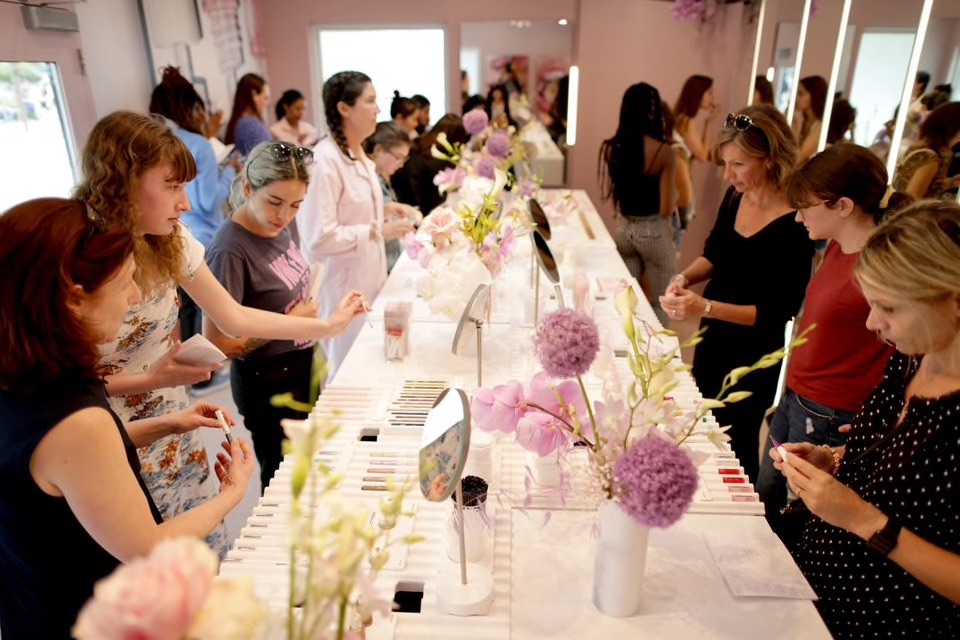 They came in droves.

The young people who crowded into the blush-colored pop-up storefronts in the Seaport for the opening of Glossier wore crop tops, high-waisted jean shorts, and thick framed glasses. They had bleached blond hair, persimmon-colored lips, and dewy pink cheeks — and they were all there for makeup that doesn’t actually look much like makeup at all.

Unless of course you want to look like you’re wearing makeup. That’s fine too, because Glossier, the billion-dollar Instagram-driven brand that created this buzz, is all about inclusivity. And last week, its team of pink jumpsuit-clad “offline editors” were more than happy to feed the seemingly insatiable customer demand for its line of Boy Brow gels and Milky Jelly Cleansers.

“I just want to live here,” said Cleveland Khun, 24, who came to survey the sheer moisturizers and glimmery Lidstar shadows before taking a selfie in front of the brand’s enormous G logo.

Whether Glossier is a makeup brand you’ve never heard of or a makeup brand you cannot live without depends largely on your demographic. (Are you under 35? Do you follow brands on Instagram and buy products through its ads? Then you’re the target.)

Glossier (rhymes with dossier) started on the web in 2014 as an extension of the Into the Gloss beauty blog. Its 34-year-old founder, Emily Weiss, has been hailed for making makeup more accessible by crowdsourcing the kinds of skincare products her fanbase wanted.

Weiss arrived at an opportune moment: Department stores that once dominated beauty sales were seeing revenues plummet, while makeup meccas that let shoppers play with products were skyrocketing. But even the latter still largely overlooked younger consumers. By treating its 18- to 35-year-old customer base like besties and responding directly to their desires, Glossier soared to a $1.2 billion valuation in just five years.

Its prices are only slightly higher than drugstore cosmetics — mascaras are $16, and its Balm Dotcom salve is $12 — and its reported revenue more than doubled last year, reaching $100 million. Glossier also touts that it sells a Boy Brow eyebrow gel every 32 seconds.

It now has brick-and mortar stores in New York and Los Angeles, and recently hosted pop-up stores in Miami and Seattle. Its Boston pop-up launched Wednesday and will be open through Oct. 4.

The company’s meteoric rise reflects just how rapidly the beauty galaxy is expanding.

In the era of the selfie, and buoyed by Kardashian contouring videos and YouTube and Instagram tutorials, beauty and skin-care sales have been booming: to $532 billion globally in 2017, according to OrbisResearch, and projected to hit $806 billion by 2023.

Although much of the traditional retail industry has faced a reckoning, sales of beauty products are growing because they hit a sweet spot for shoppers, said Tiffany Hogan, an analyst at Kantar Consulting. Fast fashion fanatics want the same variety in the beauty aisle, she said, and more broadly, consumers are embracing wellness and skin-care regimens.

Moreover, the cosmetics industry is becoming more inclusive, with brands such as Rhianna’s Fenty Beauty widening the palette of skin tones available to consumers, and Mac’s unisex makeup extending its reach beyond the strictly feminine market.

The result, Hogan said, is “there are so many more niches and trends right now that people are buying into that it creates more demand.”

Where consumers buy their mascara, however, is changing faster than you can bat an eyelash.

Makeup amusement parks Sephora and Ulta Beauty have seen blockbuster growth over the past few years, while Saks Fifth Avenue and Macy’s and other struggling department stores are giving their beauty sections face-lifts, letting shoppers lounge and pamper themselves. And drugstore chains are also bulking up their beauty aisles to let consumers test and experiment with brands.

Although online sales still make up only a fraction of the beauty market, Glossier is using pop-up stores to spread brand awareness and to position itself to grab a larger slice of the pie.

The company’s head of marketing, Ali Weiss (no relation to Emily Weiss), said the beauty industry has long been built from the top down, relying on celebrity endorsements while making consumers feel as if they were dependent on the brand’s expertise. In contrast, Glossier got its start “by sitting on the bathroom floors and edge of the bathtub,” she said, showing consumers how to use products and featuring real people in its ads, with peer recommendations driving much of its growth.

Ulta Cosmetics announced in late 2018 that it was pulling back on its rollout of stores, and, after a surge in sales, the makeup line from model Kylie Jenner, launched in 2015, may already be losing some of its sheen. Last month, L’Oreal announced that its sales fell short of estimates.

Meanwhile, Amazon launched a makeup line with Lady Gaga, a signal the e-commerce giant is prepared to go big and push out the competition.

“A lot of these beauty brands went through retailers first, like department stores and then Sephora and Ulta, and they don’t have a direct-to-consumer connection,” she said. “Those brands are answering to the people distributing their product, not who’s using their product.”

And it helps, of course, that the product is simple to use.

“It’s a very easy entry point for people, especially younger girls,” said makeup historian Gabriela Hernandez. “It’s not intimidating for them, it doesn’t take necessarily any skill to apply. That’s what kids want — their environment is complicated enough with social media . . . I think they like the relief of not having to try that hard.”

Lauren Beitelspacher, a marketing professor at Babson College, said one of the drivers for Glossier and other digital-first cosmetics lines, such as Drunk Elephant and Winky Lux, is the feeling younger generations want brands of their own.

“The legacy brands assumed they could follow a previous model: a mom would take the daughter to buy the same product she used. But that model doesn’t exist anymore because these kids can reach out and create their own relationships with brands,” Beitelspacher said.

“Glossier was designed directly for the Instagram generation,” she continued. “It’s all about making people look better in their selfies.”